Due to NSFAS having insufficient funds earlier this year, they then had to reallocate funds within the department. Unfortunately, this has now lead to other areas of the department facing the consequences.

While presenting the Higher Education Budget Vote to Parliament, Minister Nzimande spoke on how the NSFAS shortfall impacted the rest of the department.

At the beginning of the year, NSFAS ran into some issues. It was then announced that NSFAS had insufficient funds to allocate funding to first0time entering students of 2021. The solution? The Department of Higher Education (DHET) then reallocated funds from within the department.

Following the shortfall experienced by NSFAS, we reprioritised our departmental budget to ensure that all deserving, NSFAS-qualifying students are able to receive funding for the 2021 academic year.

He then continued to say that, "the budget cuts will slow down even faster movement in the expansion of post school education and training opportunities".

The NSFAS approved budget for 2020/21 is R41.5 billion. This excludes the R6.4 billion additional budget approved.

NSFAS received around 799 017 applications for 2021, with 67% of the new applicants being SASSA beneficiaries.

NSFAS also promised students that they would be receiving laptops to assist them with online learning, the new normal due to the pandemic. It took NSFAS a year to start delivering these laptops.

In ensuring that students are further supported in their studies, NSFAS awarded supply and delivery tenders for laptops for NSFAS students to four (4) service providers on 5 November 2020.

NSFAS received a lot of criticism for the massive delay in the delivery of these laptops. Nzimande explained, "surging global demand for laptops triggered by the pandemic meant that NSFAS could not meet its planned delivery of the laptop devices for 18 April 2021.

NSFAS is now said to be working on a revised timetable to deliver the laptops in batches until 30 September 2021.

The Department of Science and Innovation (DSI), which Nzimande is also the Minister of, will award bursaries to PhD students.

We are also examining new mechanisms, possibly backed by both public and private sectors, to support students in the so-called “missing middle” income bracket, and post graduate funding.

The Minister will table a plan which outlines options for student funding which will include Missing Middle funding as well as postgrad funding, and present it to Cabinet. 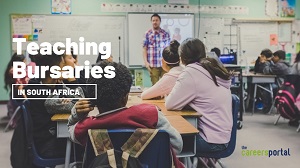