A veld fire that started on Sunday morning on the slopes of Table Mountain has destroyed a local restaurant and spread to the UCT campus. Reports have come in of fires burning on upper campus, middle campus and medical campus.

UPDATE at 13:42 Students evacuating all campuses as strong winds aid the spread of the fire. UCT Sports Centre reported to have caught alight.

UPDATE at 13:42 Students evacuating all campuses as strong winds aid the spread of the fire. UCT Sports Centre reported to have caught alight.

UPDATE at 13:30 - The wind has picked up in Cape Town and is fanning the flames of a fire that is raging on Table Mountain. Reports are coming in of fires burning across the Upper Campus, Middle Campus, outside the Fuller Hall residence and on the Medical Campus.

Residents of Observatory in Cape Town were woken on Sunday morning by the sound of helicopters flying low over their buildings.  Firefighters were alerted to a fire burning on the slopes of Devils Peak, just about the Groote Schuur hospital.

It is an unseasonably hot day in Cape Town with temperatures expected to reach the low 30s.  Mercifully there was no wind in the morning as the firefighters attempted to control the fire.

However by 11am the fire was still not controlled and had spread up the mountainside and down over the suburbs of Rondebosch and Newlands.

A video captured the moment when the iconic Rhodes Memorial restaurant was damaged by a serious explosion. A section of the famous tearoom has been destroyed.

Sanparks have issued a statement that all hikers in the Newlands area should evacuate the mountain with immediate effect.

The fire was described by Sanparks as 'out of control'.

By 12pm the fire had reached the edge of the UCT upper campus and could be seen just above the tennis courts, which form the western edge of the campus, adjacent to the mountain. 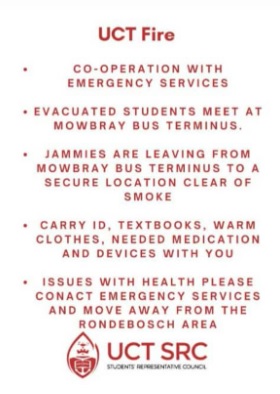 Request for support from Pride Shelter

West Coast TVET College has opened their Trimester 2 applications. The college provides you with an opportunity to make a career change with the skills you gain.

Applications for the 2021 Youth Capital Influencer Programme are open. Are you passionate about finding solutions to youth unemployment? You should join!

King Hinsta has opened up their applications for semester two and you can now apply. They offer a good range of sources from Business management to hospitality. Hurry up and apply as the applications close soon.

If you are a Unizulu student or a prospective student who requires funding, we might have the answers you need. We have all you need to know about NSFAS and who qualifies.

The science in getting a job

Looking for a job is a tiresome process with some calling it a job all on it's own.
Crafting a strategic CV is therefore essential. Boston City Campus gives you some insight into the science of getting a job and how to crack it.

Will Students Have To Pay For A NSFAS Laptop?

Some students might need some clarification on how exactly the NSFAS laptop will work. Will students be paying for it? Will students still get their NSFAS allowances? Keep reading for answers to your questions.

Civil society groups are now calling government's termination of the R350 grant 'unjust' and have called for government to extend the grant until the Basic Income Grant is implemented. The #PayTheGrants campaign has said that citizens have the right to these grants.

Fund Your Studies with a Loan from Fundi

Education is the key to your success. Fund your studies with a loan from Fundi.

WeThinkCode_ calls for applications from candidates in Kwa-Zulu Natal for its software programme that kicks off in July 2021. This comes after the opening of the academy’s Durban campus. They have 100 fully funded courses available.

Which Universities Are Open For 2022 Applications In South Africa?

Are you in Matric? Looking to study further in 2022? Institutions of higher learning applications start opening from May 2021 to study in 2022.

Why Is Taking A Gap Year A Good Idea?

A gap year is typically known as a sabbatical year that is usually taken by students after high school. The aim of taking a gap year is to provide students to discover themselves and decide what type of education and career pathway they wish to pursue. A gap year is a way of getting students to step out of their comfort zones away from their familiar surroundings into a new environment.

SASSA has discovered a high number of temporary disability grant holders in the Western Cape. They are conducting research with The University of Cape Town, to understand the reason behind the abnormally high numbers.

Payments For R350 Grant Are Delayed - Here's Why

Are you wondering when your money is going to come from the R350 grant? SASSA's CEO has given insight into why beneficiaries have not received that payment SMS yet. Keep reading to find out.