Doing the hard work and getting top notch results definitely has it's rewards. Matric top achievers are being awarded  bursaries and laptops for their great work. President Cyril Ramaphosa has labelled those who sat for the 2020 National Senior Certificate 'scholars of courage'.

With the pandemic completely transforming the education sector in 2020, the Class of 2020 finishing the year and performing well in the National Senior Certificate (NSC), they have definitely made us proud. The top Matric achievers have also been rewarded for their great work.

The top 100 Matric learners in the Free State will receive bursaries from the provincial department.

Free State had the best performance in the 2020 NSC exams achieving a pass rate of 85.1%, despite the numerous challenges they faced due to the COVID-19 pandemic.

The province achieved 40,4% Bachelors passes and increased the number of Diploma passes when compared to last year.

The department is said to have done all they could to support teachers and learners during the 2020 school year.

Head of Exams in the province, Kenneth said:

For the Matrics in the whole country, I actually am sad to indicate that it was really a challenging year. As you could have seen, generally our results dropped and it was expected perhaps because learners did really well on their own, including the support we have provided so it was a difficult year.

Schools has to adopt new ways of dealing with preparing learners with some learners coming to school at irregular times, says Kenneth.

MTN Foundation also handed over laptopsto the top 33 achievers nationally and the top 15 achievers in each province.

In his tribute, President Cyril Ramaphosa described the Class of 2020 as scholars of courage.

“In the face of great difficulties brought about by the COVID-19 pandemic, our learners have been resilient, they have done themselves, their families and their country proud,” said the President.

The President applauds the 75.8 percent pass rate among female matriculants, as this lays an important foundation for the empowerment of young women in the country.

The matric results were announced on Monday, 22 February 2021, by the Department of Basic Education.

Minister of Basic Education, Angie Motshekga, said that she is very happy that indeed in the midst of all the difficulties, we're able to say 76.2% with more quality passes this year. 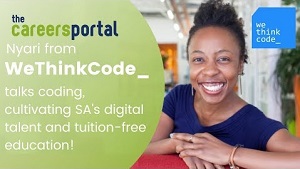