Fists flying, police firing stun grenades and angry confrontations were the order of the day outside the Brackenfell High School this morning.  Protests that started on Friday continued today and looked like they could escalate further as tension and anger grew on both sides.

Fists flying, police arriving and protestors from both sides of the fence have now erupted into violence outside Brackenfell High School. This outbreak of violence comes over reports of a Matric event that was organised for white pupils only.  The event is said to have had only white pupils and parents in attendance, as well as two white teachers.

Supporters of the school have denied that the event was organised in this way.  The school released a statement confirming that there was no official Matric farewell event and any event held was unofficial and not representing the school.

This explanation was not good enough for the EFF who criticised the event and the school. EFF Western Cape Chairperson, Wandile Kasibe, said:

The event reproduced a space for segregation. The school has distanced itself from the event, but two teachers went. They must be fired. We are going to the school to confront that racism.

The EFF embarked on a protest to march against the alleged racism which has now turned into a violent battle between EFF protestors and residents of Brackenfell. Residents were heard shouting “what are you doing here” to protestors and instructing them to leave which eventually turns into punches rolling.

One resident told IOL, “The EFF will not come in Brackenfell and disturb our country. Die EFF gaan nie kom moeilikheid maak in Brackenfell nie" while another said, “To post something that is not even true, just to get some publicity, just to become famous is that what it is all about these days. What has South Africa come to these days? South Africa was once a beautiful country and it is not any more.’’

The police became aware of the battle and headed straight to it leading to stun grenade being fired and residents demanding that the protestors be arrested.

Residents were worried about roads being closed down and how this protest could disrupt school children, especially now that Matriculants are writing their final exams. Western Cape Education Department (WCED) spokesperson Bronagh Hammond said, "The WCED will also be monitoring the actions of the EFF (today). Matric learners are writing their NSC, so any disruption to these examinations could have negative consequences for all the learners".

Today's EFF protest follows one of Friday as the political party is now calling for two teachers and the principal of Brackenfell High School to be fired.

Those opposed to the school's actions highlight the fact that two teachers attended the event which they believe makes it appear to be an official, or at least school-sanctioned event.

A parent at the school contacted Cape Talk to explain that only 40 pupils out of 500 attended the event, which they described as a private party, and the fact that all those attended were white was a coincidence.  Tickets for the event were apparently available at R500 each.

The Western Cape Education Department confirmed that Brackenfell High currently has two coloured teachers, no black teachers and the rest of their 40 teaching staff members are white. 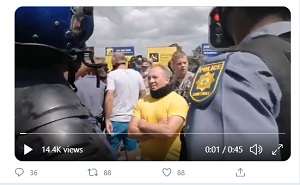 What Jobs Can I Do With A History Degree?

What Jobs Can I Do With A Criminal Justice Degree?

A group of Grade 12 pupils in the Western Cape will soon be writing Africa's first-ever matric paper on marine science. One of them went down her journey in studying the subject over the past three years.

Why You Haven't Received Your R350 Grant Through Cash Send Yet

Have you chosen the Cash Send payment option to receive your R350 grant and still waiting on your payment? Well, keep reading to find out why you have not received your payment yet.

Have you heard of NYDA? Did you know they offer a Business Development Training for young people?

Unemployed Caregivers Without ID Books Are Eligible For R350 Grant

SASSA has recently announced that unemployed caregivers who do not have an identification document and who receive child grants can now apply for the R350 SRD grant.