NSFAS has already nearing the 500 000 mark for applications received rom those wishing to have funding for the higher education studies in 2021. The Minister of Higher Education has congratulated the scheme on hitting this mark.

With the closing date being just over three weeks away, NSFAS has already received over 493 904 applications for 2021 funding.

Minister of Higher Education, Blade Nzimande, has congratulated the financial aid scheme on exceeding the 400 000 mark.

This time last year, NSFAS had then only received 287 769 applications at this point. An increase in applications, even double, was also seen in provinces where they were previously extremely low.

NSFAS also released statistics for the 2021 applications received already and broke them down as follows: 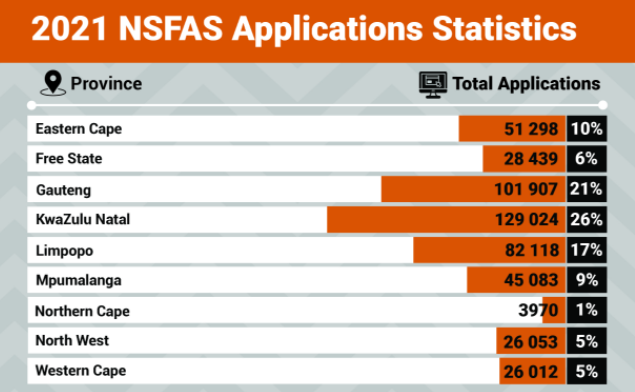 “These latest statistics are encouraging and give an indication that NSFAS’s efforts in providing easy access through partnerships is yielding positive results," said Minister Nzimande.

So far, 155 543 males have applied with females doubling that total with 338 324 applications in total. 68% of applications were therefore received from females. This, according to Nzimande, has been the trajectory for the past three years.

291 962 of the almost 500 000 applications were received from individuals who benefit from SASSA.

The Minister continued to say, "We remain highly grateful to the National Youth Development Agency (NYDA) and the Department of Basic Education (DBE) for their continuous support and partnership. NYDA centres and Teacher's Centres across the country will remain operation as NSFAS application centres throughout the application cycle. We would like to encourage applicants to use these centres".

NSFAS applications close on 30 November so if you haven't applied yet, be sure to do so before it's too late. No matter what your age is, if you meet the requirements, you can get funded by NSFAS. Click here to learn how to apply to NSFAS.

NSFAS offers bursaries for South African students studying at public universities and TVET colleges. NSFAS has got you covered with funding for registration, tuition and allowances. To apply make sure you have a cellphone number and email address as well as your supporting documents.

The National Student Financial Aid Scheme, better known as NSFAS, operates as a public institution that funds public university and college students who come from low-income households. If you are curious as to whether NSFAS funding covers Regent Business School fees, read further.

Get Your Amended Senior Certificate With College SA

Distance Learning With A Difference

Distance Learning allows your to study on your own time, at the place and pace you choose. You can study from anywhere, at any time, working at your own pace. Some courses will require you to go and write exams at designated exam hall locations and others don't.

Online learning has always been a worthy alternative for prospective students who have other career commitments but are still interested in furthering their studies. Below is a list of registered colleges through which one can study online.

How To Apply For A Smart ID Online

Apply online for your Smart ID. e-Home Affairs allows people to apply for their smart ID cards and passports, upload supporting documents and pay for their applications online. The best part of this process is that individuals can now do all of this in the comfort of their own homes.

Some Teachers Still Doubtful of Vaccine

As schools are set to reopen after the winter break, the developments regarding the vaccination of the education sector show that a small percentage of teachers are still hesitant to receive the jab.

Residents of Cape Town have been living in fear the past few weeks as taxi violence continues. With schools reopening from 26 July, there is now concern about how taxi violence could impact the return to schools.

Western Cape schools saw a fewer number of learners attending as they reopened schools on Monday. It's not clear if the taxi violence has completely stopped in the province but it has been impacting the number of learners present at schools.

Are you interested in Hospitality and Tourism? Explore the endless opportunities in the exciting world of hospitality and tourism and study towards a certificate or diploma at MSC Business College.

Minister Says Further Closure of Schools Would Be Devastating

How Many Years Does It Take to Study Medicine?

Choosing a career in Medicine involves the lives of people depending on you. Medical studies can take longer than other qualifications to complete but is recommended as one of the most rewarding careers you can pursue.

Academy Training Group (Pty) Ltd was established in 1997 and serves as a private training institution.  They have over 24 years of reputable experience in the Education and Training industry! Academy Training Group is registered with Department of Higher Education. Their objective is to provide practical training and knowledge for a professional level of competency. ATG’s bespoken training courses are designed to deliver maximum benefits in the key areas of today’s business world.

NICD | Reopening Of Schools Has No Link To COVID-19 Peaks

A new surveillance report on children under the age of 19 has revealed that the opening and closing of schools has not affected the COVID-19 cases in any way. This suggests that schools are not the main contributors to the waves of the virus.