President Cyril Ramaphosa has announced changes to the alcohol and curfew rules in response to an increase in Covid-19 cases across the country - especially in Gauteng.

The President announced that there have now been 276 242 confirmed cases of Covid-19 in the country, which has taken the country into the top ten of global hotspots.

As a result of this increase in cases the national Cabinet has decided to reintroduce a ban on the sale of alcohol across the country, with immediate effect. There will also be a national curfew introduced.

Because of the increase in trauma cases in hospitals the government has decided to re-introduce the ban on the sale of alcohol, effective immediately.  In additional a national curfew has been introduced from 9pm to 4am - starting from tomorrow, the 13th July. 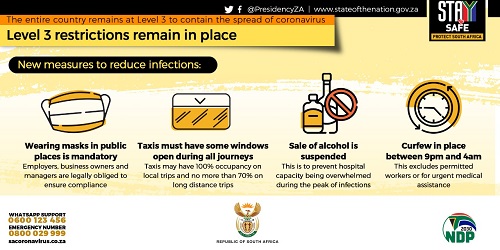 Your Options For Life After Matric

Even though COVID-19 is still among South Africans, matriculants are encouraged to continue to follow their dreams and make plans to continue on their chosen career path. It is important to have hope that better days are ahead.

Study Now At The Academy Of Learning

The Academy of Learning was established in 1985 an a South African owned and registered company that specialises in computer and business training skills.  All Academy of Learning institutions must abide with Government Further Education and Training regulations. The main aim is to fulfil the needs of learners and the business community by identifying the gap between higher education and the reality of the corporate environment. Through identifying this need, they provide a customised program for each learner by ensuring they meet the requirements for effective training at an affordable cost.

What Benefits Does NSFAS Offer Students?

The National Student Financial Aid Scheme (NSFAS) was established in 1991 and replaced the Tertiary Education Fund of South Africa (TEFSA) in 1999 with the gazetting of the NSFAS Act of 1999. NSFAS is fully supported by the Department of Education and training. The main aim of NSFAS is to provide financial support to eligible students to help pay for the cost of their tertiary education at any TVET college or private institution.

In 2019, the False Bay TVET College Muizenberg Campus, known for its exceptional Hospitality and Catering graduates were approached by the Afternoon Express Show to not only host the competition qualifying heats but to include a selection of N6 Hospitality students to partake in the SABC 3 Taste Master Competition.

We're looking for keen, compassionate matrics and recent graduates with great English and Maths marks to join the YearBeyond volunteer programme. In addition to the work you'll be doing to support learners in schools, as a volunteer you'll be building your personal profile and setting yourself up for success in the long term.

Eskom has brought back loadshedding but has said things are getting better and has since suspended loadshedding. However, South Africans know to not get comfortable just yet. We have the latest loadshedding updates for you as per the Eskom and municipal schedules.

Free State's Education Department is confident that this matric marking season will go down smoothly, even with markers having tested positive and more having dropped out.

Government Will Monitor If Schools Are Ready To Open

The Department of Basic Education (DBE) will now hold consultations on the openings of the 2021 school year as we still experience this pandemic. They will be monitoring schools to check whether they are ready to reopen and to also ensure that it can be done safely.

We're looking for keen, compassionate matrics and recent graduates with great English and Maths marks to join the YearBeyond volunteer programme. In addition to the work you'll be doing to support learners in schools, as a volunteer you'll be building your personal profile and setting yourself up for success in the long term.

The National Department of Health and the Solidarity Fund has announced that South Africa has made the down payment to secure the country's entry into the COVAX facility.

Schools Could See Shortage Of Teachers In 2020

As Covid-19 cases have increased in South Africa, there is a concern for the large number of teachers who have been infected and have lost their lives due to the coronavirus.

Health Minister Dr Zweli Mkhize says that the South African government's plan to roll out a Covid-19 vaccine by the second quarter of 2021 is on track.

The National Student Financial Aid Scheme (NSFAS) is a government student bursary scheme which receives its funding budget from, and reports to the Department of Higher Education and Training. NSFAS will cover more than just your tuition fees, should you qualify.