The Matric final exams of 2020 were marred with controversy when it was announced that two exam papers had been leaked before they were written. The Education Department wanted the papers to be re-written but the courts ruled against them. An investigation had to be held to determine whether the final exam marks could be released. The 1 million learners who wrote the exams will be glad to know that the report has now been released.

Because the leaking of three exam papers for the Matric final exams of 2020 the Department of Basic Education tasked the National Irregularities Committee to investigate.

That committee, headed by High Amoore, has now completed its report and presented it to the Department. The findings were presented at a media briefing on Sunday afternoon.

The investigation confirmed that there were two leaks.

The first leak occurred from one province's contract printers. The individual concerned has been identified and has already appeared in court.

A second leak was from the government printers - which prints for two of the provinces.  That leak is being investigated further.

The investigation found no problems occurred during the storage or distribution.

How Many Learners Had Prior Access To The Leaked Exam Papers? 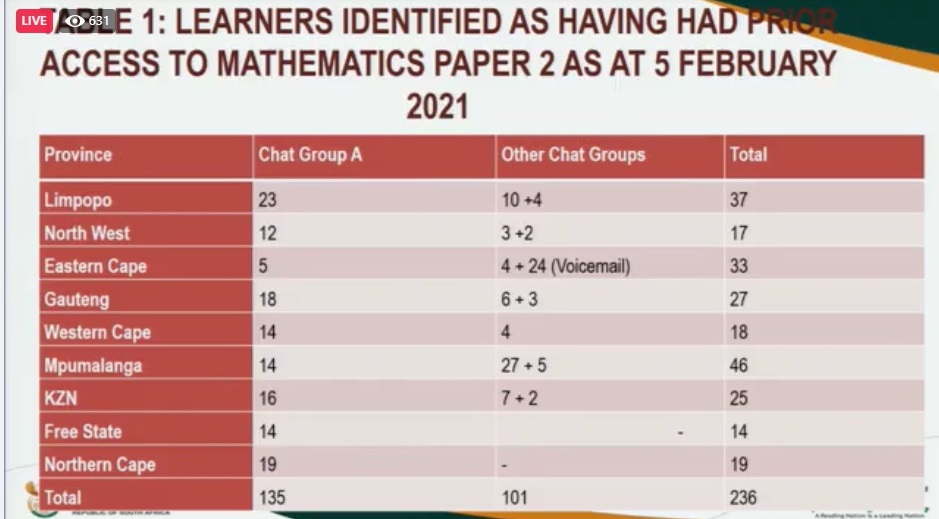 Parts of the exam papers were spread by learners via Whatsapp chatrooms.

Chat room A had 135 learners - all part of a special group for talented learners.  Only 2 questions were sent to this chat room at about 10pm on the Sunday night before the exam, which was to be written the next morning. The learners were all interviewed and many denied even opening the message before the exam.

No evidence was found that these candidates benefitted from prior access - if they had it.

Total of 236 learners were able to receive the Maths paper before it was written.

The number of learners who wrote the Physical Science paper was smaller.

Another part of the investigation looked into the marks that the candidates received to see if there was any outperformance in Paper 2 compared to Paper 1.

It would appear an outperformance is only observed in 2 candidates. The rest performed as they would have been expected to .

There was no visible impact on the Physical Science results to show any impact of leak on the results.

The findings of the investigation were:

Widespread leaks of the exam papers did not occur.

There has been no compromise to the marks as a whole

The report of the National Irregularities Committee was presented to Umalusi two days ago. Umalusi will hold a public briefing tomorrow about the exam results.

This is a developing story

Covid-19 has changed the lives of everyone across the globe. Institutions of higher learning had to take major decisions to overcome some of their difficulties.

The Benefits Of Taking A Gap Year Abroad

A gap year is a wonderful opportunity that can help you find yourself and discover your true potential.

A gap year is a chance to learn more about yourself and the world, and it can be a great way to explore your interests.

Following reports by the National Institute for Communicable Diseases (NICD) that the country's Covid-19 cases have increased in the past week. TUT is looking to implement measures that will ensure the safety of its staff and students as the academic year draws to a close.

Did you know you can save yourself a whole lot of effort and apply for a SASSA grant online? Now you do! SASSA offers an online application service for those wanting to benefit from one of SASSA's many grants.

In an effort to encourage young children to read in their mother tongue, the South African Post Office and non-profit organisation, Nal’ibali have partnered on a project which encourages children to do just that.